Oxmoor House
Mrs. Riley says that this recipe may be halved and baked in a 13″ x 9″ baking dish at 350° for 40 minutes or until bubbly. She also recommends fresh herbs (when in season) instead of dried. To avoid extra chopping, she sometimes steeps sprigs of fresh herbs in the milk as it comes to a boil (this takes about 10 minutes). She then removes the herbs from the hot milk, adds the grits, butter, and salt, and cooks the grits as directed before assembling the casserole.
Yield:
Makes 14 to 18 servings.
Ingredients:
8 cups milk, divided
1 tablespoon salt $
2 cups uncooked stone-ground white grits
1 cup unsalted butter
4 large eggs, lightly beaten $
2 teaspoons dried dill weed, thyme, or sage or a combination of the three (or 2 tablespoons chopped fresh herbs)
2 cups (8 ounces) shredded Cheddar, Gruyère, or Swiss cheese or a combination of the three, divided
6 slices bacon, cooked until crisp and crumbled $

Want to save this recipe?

**View the full recipe at 1krecipes.com**

Please feel free to share your favorite recipes below

Much to my delight, I learned something wonderful about Krispy Kreme today.  When I was a little girl, my parents would take me to the “donut factory” so we could watch the machine glaze the donuts with that wonderful recipe of yummy goodness.

Thank you Krispy Kreme and the Salvation Army for helping our communities!  I am looking SO forward to June! 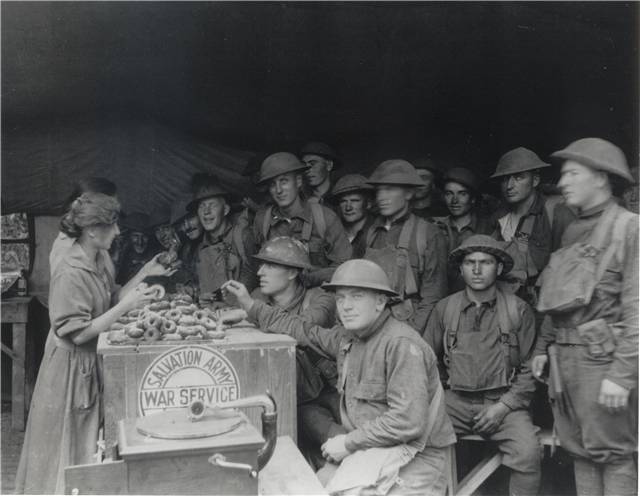 Customers are encouraged to donate to The Salvation Army’s miniature Red Kettles stationed at the registers of participating Krispy Kreme locations. All donations will support the local communities where the donation was made.

“Each year on National Doughnut Day, we encourage our customers to celebrate by coming in to get their favorite doughnut for free, but this year, we wanted to make the celebration even more meaningful,” said Tony Thompson, President and CEO of Krispy Kreme Doughnuts. “As founders of National Doughnut Day, The Salvation Army is a natural partner. We’re excited to collect funds for the many initiatives they support, especially since all donations will go directly to the local communities.”

“National Doughnut Day has become a true American tradition, but many don’t realize the historical significance of the day. The partnership with The Salvation Army and Krispy Kreme brings greater visibility to the importance of the day and the idea of helping those who may have fallen on hard times,” said Col. Ron Busroe, Community Relations and Development Secretary for The Salvation Army. “With Krispy Kreme’s generous offer of a free doughnut, we hope everyone will extend that generosity by giving back to support their local community.”

Below are a few additional facts about the history of National Doughnut Day and The Salvation Army:

About The Salvation Army

The Salvation Army, established in London in 1865, has been supporting those in need in His name without discrimination for more than 135 years in the United States. Approximately 30 million Americans receive assistance from The Salvation Army each year through a range of social services: food for the hungry, relief for disaster victims, assistance for the disabled, outreach to the elderly and ill, clothing and shelter to the homeless, and opportunities for underprivileged children. 82 cents of every dollar donated to The Salvation Army are used to support those services in 5,000 communities nationwide. The Salvation Army tracks the level of need across the country with the Human Needs Index (HumanNeedsIndex.org). For more information, go to salvationarmyusa.org or follow on Twitter @SalvationArmyUS.

I love this blog site!

We know how hard it can be to get dinner on the table. That is why we created the Six Sisters’ Menu Plan Membership! Each week you will receive a weekly menu plan (that includes 6 main dish recipes, 2 side dish recipes and 2 dessert recipes) and a detailed shopping list to make grocery…